skip to main | skip to sidebar

Who Said this Would be Easy?

My watch read 2hours and 52 minutes. This meant that, by my own volition, I had been running through the woods on my own two feet for a very long time. Even more surprising than the fact that my legs hadn't crumpled yet was the realization that I was fairly perky and still smiling at hikers and bikers I passed along the way. After three hours of hard continuous exercise and elements, it's an annoying discovery about oneself.

After greeting a group of cyclists with a hearty "Good morning!" while my heart monitor beeped rapidly, I admitted inwardly that I had become that person--the one whose cheeriness agitates others. For me, that person, the one whose enjoyment of arduous long distance events never faltered, was a well-groomed gentleman named Steve Rojek. In recent years, this decorated equestrian has represented the U.S. in international endurance racing. I first encountered Mr. Rojek competing in competitive trail rides around central Vermont in my adolescence. He had a reputation for remaining so upbeat during rainstorms, fatigue, bee stings, and other trail maladies that it irritated the rest of us mortals. Primarily, his bionic good nature highlighted the fact that the rest of us were...well, not very good natured after mile 20. Our spirits sagged, our energy failed, and our smiles turned to crabby exchanges, leaving us just plain puzzled by guys like Mr. Rojek. I've used the plural "guys" there, but I should clarify that there was only one rider as invincible as Mr. Steve Rojek.

In one event so predictably difficult that we called it the Hartford Heartbreak 40 miler, we hit rain, snow, mud, and ice all in one morning. At mile 12 my mare refused to cross a river that swelled overnight to frightening heights for a pony, so I dismounted and entered the water to reassure her. For the next several miles, my cold wet breeches chafed my calves raw. The overnight rain also knocked down trail markers between miles 16 and 22, which meant most of us added an unnecessary loop to climb Heartbreak Hill TWICE.

After the second 800-foot ascent, my tired mare's pulse and respiration inverted. Veterinarians put us on mandatory hold while she puffed and puffed and finally recovered. It was about this time that Mr. Rojek crested Heartbreak Hill on his dappled grey Arabian gelding. His tailored pale blue shirt now bore a swath of blood across one sleeve and his neatly trimmed mustache showed a clump of mud. The visor of his helmet, too, was cracked and muddy, the evidence I heard later of his horse bolting across the river and scrambling madly up a bank into oncoming traffic on Route 12A. En route, the horse launched Mr. Rojek into a rock-strewn stretch of trail and galloped two miles towards the nearest town before someone caught him.

Nonetheless, Mr. Rojek was smiling. His was a genuine smile, too, I should add, not an act he feigned for the rest of us. Something about the gnarly mishaps of the day agreed with him. He loped past the vet station where I stood pouting and flashed an open-palm wave. "Lovely day, isn't it?" he called out on his way to tackle more miles, the pursuit that brought this man so much solace.

I looked at a fellow competitor who withdrew from the ride mid-way due to knee pain. We puzzled over the complete lack of sarcasm in Mr. Rojek's salutation. What on earth could be so lovely about this? For years I pondered over that as I encountered Mr. Rojek out on the trail. Always-- at mile 18, mile 47, mile 92-- his face came through the fog and downpours and snow with a grin. When you're on the other side of that grin, mired in the difficulty of your endeavor, you start to wonder if the person might be alien. When you are aching, tired, and hungry, how can the person next to you still be smiling?

Then I became an adult myself and took up sports like marathoning, bike touring, and yes- still long distance trail riding. These long miles out in Mother Nature agree with me on every level and, while I hate to admit it, I have become a version of Mr. Rojek. Finally, I understand the man who puzzled me for ages. Now, I too annoy others with a hearty wave and toothy grin. As others grunt and gasp up hills, I waste extra energy reflecting on the sweet smell of eucalyptus in the woods at this time of year. I incite annoyed looks from others on the trail.

Let me be clear. It's not that I don't feel the suffering or the sheer effort or overwhelming fatigue to get to the next mile. I do. When my watch approached 3 hours last Sunday, though, the small details of my discomfort paled beside my solace and satisfaction of long distance in the woods. The larger joys far outweighed my flaming ankle, crampy calves, and thirst. I ached and fatigued just as much as anyone on the trail that day, don't be fooled by the grin and don't start wondering if I am alien.

For some of us, long distance nourishes our souls. Tired legs and sore knees aside, it is the antidote to our busy minds, the peace inside us. Our smile despite the discomfort.

So, Mr. Rojek, I raise my electrolyte filled glass to you. Thank you for being an early inspiration and please forgive any annoyance I sent your way. Ride on!
Posted by Jec Aristotle Ballou at 10:05 AM

Promote Your Page Too 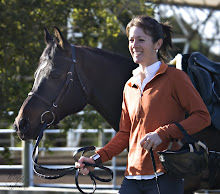 Jec Aristotle Ballou
Santa Cruz, CA
Professional starving artist, ardent philosopher, and diligent steward of horses. I should also mention-- for the purposes of credibility-- that I am an award-winning journalist, published poet, and popular dressage instructor. Feel free to poke around my personal web site for more specs. I hate tooting my own horn....